‘Do You Want Frankston To Become Like Dandenong?’ is the title of a racist flyer distroed in Frankston in August 2009. The author is unknown. (See : Dulce et decorum est pro patria mori; Or: Go back to Africa and/or Europe, August 20, 2009.)

What is known is that Neo-nazi network Blood & Honour has a presence in Frankston, and is organising a gig in Melbourne on September 12, along with fellow boneheads belonging to the Southern Cross Hammerskins. The ‘Ian Stuart Donaldson’ memorial gig is an annual affair, held each September, last year in Beaconsfield (on the outskirts of Melbourne), in 2007 at the Melbourne Croatia Social Club in Sunshine and in 2006 at The Birmingham Hotel in Fitzroy (now under new management).

Both Blood & Honour and the Hammerskins have been proscribed in a number of foreign jurisdictions on the basis of their promotion of racial hatred and violence, most recently in Spain (see : Hammerskins? ¡Ay, ay, ay, no me gusta!, August 12, 2009) and the Czech Republic (see : Czech Bully Boys face inconvenience, June 16, 2009) but are lawful associations in Australia. Over the last year or so, the two groups — both established c.1993 by Melbourne bonehead Scott McGuinness — have modestly expanded their online activities, introducing a radio show and a new distro, 9percent productions.

Jesse XXXXXX, who maintains the genocidal YouTube channel and uses the 9percent site to flog muzak and neo-Nazi objets de tat, will be prancing about on stage in September with his band, Ravenous; he will presumably be joined by Jason XXXXXX, who maintains the schammerskins site, and local (Victorian) B&H rep Justin XXXXXX. (Note that, while Jesse has withdrawn/been forced to withdraw at least two of his videos — which featured humourous depictions of Jews being killed — those which remain merely celebrate Nazism.) Previous celebrity guests at B&H events have included ‘Australia First Queensland’ representative Jim Perren, the ‘anarchists’ Welf Herfurth and his teenage sidekick Scott XXXXXXXX, and Canberra yuppie Nicole Hanley: all will presumably be attending the Sydney Forum several weeks later.

Finally, note that the 2006 gig was accompanied by an incident in which a group of boneheads monstered a lone (black) woman, while last year Jesse took the opportunity to record the song ‘Oh no here comes an Abo’ with the Belgian neo-Nazi reich ‘n’ roll band Kill Baby Kill; KBK’s vocalist, Dieter Samoy, has a conviction for assault(ing a blackfella). 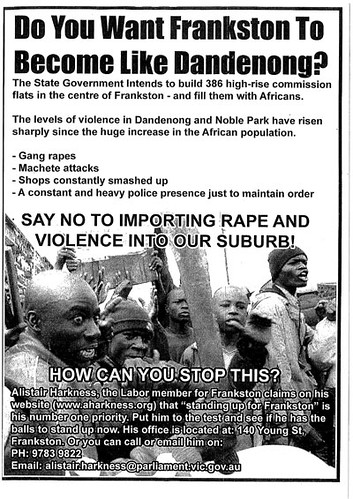 The flyer claims that the Victorian State Government plans to build “386 high-rise commission flats in the centre of Frankston” and to “fill them with Africans”. In reality, the Government was until recently considering a 7-storey building comprising 80 units at 38 Playne Street. This plan has now been abandoned (Home truths allay ‘ghetto’ fears, Jason Gillick, Frankston Independent, August 11, 2009) and future plans — using Federal Government funds — have yet to be made public.

I live in Melbourne, Australia. I like anarchy. I don't like nazis. I enjoy eating pizza and drinking beer. I barrack for the greatest football team on Earth: Collingwood Magpies. The 2020 premiership's a cakewalk for the good old Collingwood.
View all posts by @ndy →
This entry was posted in Anti-fascism, Media and tagged Blood & Honour, Frankston, Racist flyer, Southern Cross Hammerskins. Bookmark the permalink.

5 Responses to Do YOU Want Frankston To Become Like Dandenong?