Recently, the National Archive has released into the wilds of disinterested public opinion a few 30-year-old bits of paper regarding ASIO. Jeff Sparrow has written some thoughts on the released documents for Crikey. By way of introduction, this 1994 documentary:

In 1950, a year after ASIO’s formation, its head, one Brigadier Sir Charles Spry, began compiling lists of individuals to be detained in army camps should war break out. Spry’s sinister document eventually contained some 7000 people.

That’s the context in which new material from Justice Hope’s 1978 report on ASIO, just released under the thirty year rule, should be read.

As the ABC notes, the documents show that fears that ASIO “was doing the political dirty work of the Liberal Party” were “well-grounded” since the organisation was “passing scurrilous gossip onto the Menzies government” which was then used under parliamentary privilege.

Mind you, ASIO’s tight relationship with the Liberals was never much of a secret. As David McKnight argued a few years ago, the public parts of the Hope inquiry made clear that “ASIO had been largely unaccountable and had been used as a political tool during the long reign of the Liberal-Country Party coalition from 1949 to 1972”.

In particular, Justice Hope documented ASIO’s “Special Projects” section, a body that prepared material for “covert spoiling activities” and “counter-propaganda”. As an example of its handiwork, he noted that Robert Mayne, a SMH journalist, had been approached by Liberal politician Peter Coleman about establishing a magazine called Analysis to attack the Australian Left. A few days later, as an indication of the kind of dirt the new project could expect to dish, Mayne was handed the ASIO files on a number of leading Left-wingers.

Many of the newspaper reports today focus on Hope’s suggestion that ASIO’s preoccupation with domestic radicalism allowed its penetration by foreign spies.

But it should also be remembered that Hope’s inquiry was partly prompted by ASIO’s relationship with the Croatian fascist group, the Ustasha. In the late sixties and early seventies, the Ustasha conducted the most serious terrorist campaign in Australian history, with bombings in Sydney in 1967, 1969 and 1972, Canberra in 1969, and Melbourne in 1970 and 1972. Ustasha activities were discussed openly in the Croatian press but ASIO, while monitoring even the most mild-mannered activists of the Left, took no action whatsoever against these fully-fledged terrorists.

Most obviously, the Ustasha was an anti-Communist body, attacking Communist Yugoslavia’s consulates and local Left-wingers. Many ASIO agents were, in all probability, sympathetic to its aims.

Secondly, ASIO knew that Yugoslav secret agents were monitoring the Ustasha. Accordingly, it allowed the bombers free rein, so that Australian agencies could study the techniques of their Yugoslav counterparts. In the Byzantine world of the security services, low-level violence, mostly directed against foreigners, paled beside an opportunity to garner information against rival spies.

ASIO and other security forces would have had no option but to keep close tabs on Communist Party members and sympathisers in Australia. […] Much as he was loathed by the Left for his arguments, the late Bob Santamaria was correct about the Communist Party of Australia’s determination to infiltrate Australia’s trade unions. […] The 100 million people killed by communism underlined its danger and why it was the top priority of our spooks.

Leaving aside the bizarre suggestion that Australian trade unionists had any connection to the deaths of millions people, ASIO’s close ties with Bob Santamaria’s NCC epitomized the very worst aspects of its work. As Richard Hall [1937–2003] notes in his book The Secret State [Cassell Australia, 1978], “one ex-NCC man recalls that the main thing ASIO men in the trade union area seemed to want was sexual gossip – who was sleeping with whom.”

You can get a sense of the combined malice and paranoia that dominated ASIO’s operations by looking at some of its files now available under the thirty-year rule.

Here’s a couple digitalized from a dossier on the women’s liberation movement.

From the first one, we learn that ASIO casually opened files on any phone number connected with the new feminist movement. Dulcie Bethune had the temerity to use her number as a contact for a women’s liberation group. There’s no suggestion that she broke any law or did anything wrong but she duly became file VPF 22378, something that would have had real consequences on her ability to work in the public service.

The second image is of interest mostly because of the subject’s subsequent career. Today, Helen Garner is one of Australia’s most acclaimed authors. Back in 1972, she was a prominent feminist – and so ASIO kept tabs on her. Again, she seems to have done nothing other than put her phone number down on a list.

In The Australian today, Patrick Walters assures us that ASIO today is a beast of a different nature.

“More than 30 years later ASIO has changed completely. It is treble the size and a sizeable proportion of its intelligence officers are women. Its relations with its close allies are in good repair.”

But one wonders. If you substitute the word “Muslim” for “communist” and “terrorism” for “subversion”, the political climate post-911 doesn’t seem utterly unlike the Cold War.

Besides, in his reflections on the Hope Royal Commission, its former secretary George Brownbill concluded that, in fact, Australians were protected from ASIO only because the agency stuffed up so regularly.

“It would,” he said, “have been much more serious if the ASIO operatives had been more competent.”

In that light, ASIO’s new size and new efficiency does not seem particularly reassuring.

(Jeff Sparrow is the editor of Overland magazine.) 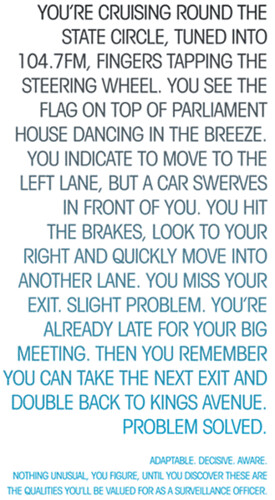 Frank Cain is the author of a number of books and essays which examine ASIO and the history of political surveillance in Australia. See ASIO: An Unofficial History, Frank Cass, London, 1994; The Wobblies at War: A History of the IWW and the Great War in Australia, Spectrum, Melbourne, 1993; The Origins of Political Surveillance in Australia, Angus and Robertson, Sydney, 1983. Also Jenny Hocking, Terror Laws: Asio, Counter-Terrorism and the Threat to Democracy, UNSW Press, Sydney, 2003.

I live in Melbourne, Australia. I like anarchy. I don't like nazis. I enjoy eating pizza and drinking beer. I barrack for the greatest football team on Earth: Collingwood Magpies. The 2021 premiership's a cakewalk for the good old Collingwood.
View all posts by @ndy →
This entry was posted in !nataS, History, State / Politics, War on Terror. Bookmark the permalink.