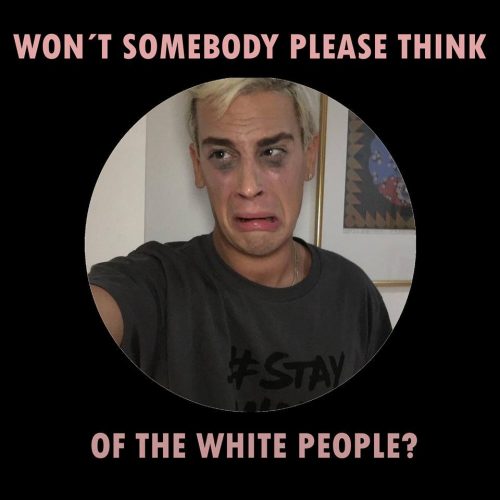 The year began with some reflections on the May 2016 Coburg protests in light of Andy Blunden’s criticisms in Arena; New Yawk-based neo-Nazi and host of ‘The Daily Shoah’ (for which ‘The Convict Report’ is the local version) Mike Peinovich (‘Mike Enoch’) is d0xxed — and his Jewish(!) wife later leaves him; Richard Spencer’s Backpfeifengesicht is slapped; Reclaim Australia rallies in Sydney (for the first time since November 2015) and neo-Nazi Michael Holt goes on trial in antifa notes, and finally; I expose a bunch of lies about the Québéc mosque shooting.

The “UPF” Goes To Dimboola, starring Phill Galea’s mate ‘Farma’ John Wilkinson; there was lots of media blah about anTEEfa; semi-pro Islamophobes The Q Society held a function at Victoria University which was disrupted (making Kirralie Smith cry in the process); fearing a wipeout at the WA state election, Arthur Sinodinos praised the highly-sophisticated 21st century version of Pauline Hanson’s One Nation Party, and finally; you can watch antifascism on film.

Prepare & Repair : taking action & keeping safe at rallies, protests & direct actions is a handy guide to trouble-making; the sophisticated Pauline Hanson in WA, The Three Stooges go to court, the Victorian government introduces anti-protest legislation and a bonehead is spotted in Daylesford in antifa notes; The SUWA Show features Jason Wilson on Trump, Gorka and The Resistance.

antifa notes includes a reference to United Patriots Front (UPF) Canberra fanboy Nathan Davidson. Last week, neo-Nazi Nathan was again in the news on further drugs charges: ‘Nathan James Davidson, 34, was arrested overnight after police found more than 600 grams of the drug ice, 1000 MDMA pills, as well as $90,000 in cash at his city home’ (Civic man arrested after police seize almost $850,000 worth of drugs, Sherryn Groch, Alexandra Back, The Canberra Times, December 21, 2017). The post also examines the numerous fake anTEEfa social media accounts that have sprung up (and more); Jewish neo-Nazi and Australia First Party member Nathaniel Jacob Sassoon Sykes is exposed as a loathsome troll for US neo-Nazi website The Daily Stormer; more antifa notes details further fake anTEEfa accounts, looks back at Reclaim Australia and the UPF, Alex Jones is exposed as a fraud in court and NONE DARE CALL IT CONSPIRACY; anarchist notes contains news on the IWA-AIT and Michael Schmidt and finally; local UPF neo-Nazis celebrate Hitler’s birthday.

A relatively busy month: first, the rapid rise and precipitous fall of a weird0 ‘anarchist’ social media account (New Wave Army / @AnarchyMami : “anarchafeminist” wEiRdNeSs); antifa notes notes, inter alia, that the UPF was kicked off Facebook and Golden Dawn was distributing propaganda in Sydney; I reviewed John Safran’s book Depends What You Mean By Extremist, published a letter from accused ‘terrorist’ John Zakhariev (then on trial in Sofia, Bulgaria) and in further antifa notes noted The Three Stooges’ court appearance, some fakes and some boneheads; I also updated some links, Jason Wilson was again a guest on The SUWA Show, talking about that AltRight and finally: From Portland to Penrith takes note of the murders in Portland and fascist antics in Penrith.

In June 2017, Andrew Bolt glittered, the True Blue Crew (TBC) held a flagwit rally in Melbourne and Jewsagainstfascism was a guest on The SUWA Show.

July 25 is the International Day of Solidarity with Antifascist Prisoners: I wrote a thing for Overland about it. I also wrote about local ‘AltRight’ propagandists ‘The Convict Report’ and #DingoTwitter, wondered at Tim Anderson’s fascist friends, noted the fact that one of The Spectator’s contributors was booted for being an anti-Semite and finally promoted the Melbourne Anarchist Bookfair.

A very quiet month with just one post on Charlottesville. Note that JJJ’s Hack put to air an interview with one of the organisers of the UniteTheReich rally, Elliot Kline (‘Eli Mosley’), as well as several anti-Semitic callers posing as Jews.

In September, The Three Stooges — Blair Cottrell, Neil Erikson and Chris Shortis — were found guilty of inciting hatred for Muslims and were slapped with small fines; I exposed AltRight blogger and ex-Spectator contributor ‘Moses Apostaticus’ as a former high school teacher from Brisbane named David Hilton, examined What Chip Le Grand gets wrogn about the Australian ‘alt-right’, laffed at Avi Yemini’s antics, wrote about the rather pathetic anti-queer rally the Party for Freedom organised in Sydney, took some more antifa notes and finally, very partially d0xxed neo-Nazi grouplet Antipodean Resistance (of which there’ll be more next year).

In October, Stephen Johnson of The Daily Mail (Australia) availed himself of a troll account to write nonsense about ‘Melbourne Antifa’, comedian Shayne Hunter unveiled himself as the founder of anTEEfa in Australia (anTEEfa are terrorists who pose a graver threat to The West than ISIS) and why he quit (‘I was ideologically possessed for four years. I would speak louder on public transport so people could hear me speak, hoping they would hear my message’ LOL), the remains of the UPF changed its name to ‘The Lads Society’ and opened a neo-Nazi clubhouse at Unit 9/158 Chesterville Road, Cheltenham and next year something I helped write on the radical right Down Under will be published by OUP.

In November I looked at Neil Erikson’s latest self-promotional vehicle, ‘Patriot Blue’, and the totes not-crazy Phill Galea went to court, Richard Wolstencroft fell foul of The Pink Mafia and Nazi-sympathising paedophile apologist Milo Yiannopoulos announced a tour of The Colonies. From MUFF to Romper Stomper!

In December, Milo went to Festival Functions in Findon (Adelaide), the Perth Convention and Exhibition Centre and to Melbourne Pavilion in Kensington. Also, the Australian Jewish Democratic Society issued a statement.

Note that yesterday, in the wake of protests at Milo’s appearance in Melbourne, a 33-year-old from Wonthaggi, Neil Erikson, and a 28-year-old from Sunbury, Ricky/Rikki Turner, were arrested and charged with riotous behaviour and affray: each were granted bail and will face Melbourne Magistrate’s Court in June, 2018. (Neil also has a court date in February as does Ricky/Rikki.)

Finally, The Australian’s Chip Le Grand wrote All About Antifa, the terrific documentary film The Antifascists was made available for viewing to the general public and the inaugural Australian Patriot Of The Year Award was launched.

I live in Melbourne, Australia. I like anarchy. I don't like nazis. I enjoy eating pizza and drinking beer. I barrack for the greatest football team on Earth: Collingwood Magpies. The 2021 premiership's a cakewalk for the good old Collingwood.
View all posts by @ndy →
This entry was posted in History, Media and tagged antifa notes, Bloggy, blogosphere. Bookmark the permalink.